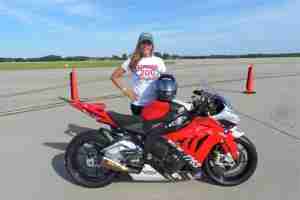 of 205 mph. Thompson’s new record also qualified her for membership in the exclusive ECTA 200 MPH Club while claiming bragging rights as the fastest RR in the MPS/F-1000 Class.
“Going into this event, my confidence was very high. I had just arrived from the California Superbike School held in Birmingham, the best motorcycle racing course school in the US. We made a few modifications to my BMW RR by adding new HP Race Parts provided by BMW Motorrad USA, Akrapovic exhaust systems and additional horsepower with Magic Bullet Advance Fuel Treatment. The wonderful folks at NorthStar Battery also helped us with special delivery of two of their excellent batteries, which was a great help,” said team owner and rider Thompson. “It’s a great honor and achievement to be the newest member of the ECTA’s 200 MPH Club, especially since I am only the 3rd female of less than 100 members. I’ll be wearing my ECTA 200 MPH Club lifetime member shirt proudly,” added a smiling Thompson.

The ECTA hosts four speed trial events at the Airborne Park facility in Wilmington Ohio each year. Prior to moving to the Airborne Park location in 2012, the ECTA held the competition in Maxton North Carolina from 1995 through 2011 and was named the Maxton Mile.
Thompson and her BMW team now turn their sights on setting new land speed records at the Bonneville Salt Flats during the July speed trials. For details, visit ValerieThompsonRacing.com.