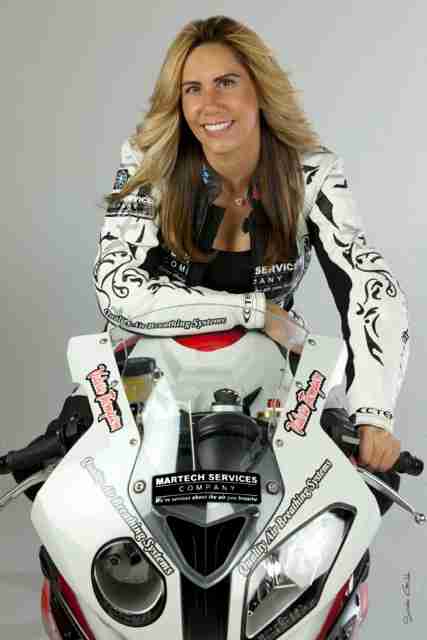 (Scottsdale, AZ) – July 9, 2012 – Valerie Thompson, owner/driver of Valerie Thompson Racing (VTR), set a new land speed record in the PP-1000 Production motorcycle class when she posted a top speed of 197.46 mph at the East Coast Timing Association’s (ECTA) Ohio Mile event July 8 at Airborne Park in Wilmington Ohio. The prior record of 190.71 mph was recorded during the first Ohio Mile event held in June at the same facility.

VTR teammate, Bob Sellers, joined the “Ohio Mile 200 MPH Club” when he set a new record of 203.569 mph on his Suzuki Hayabusa in the MPS-G 1350 cc class. Thompson’s Martech Services Company sponsored S1000 RR Superbike, is reportedly the fastest production land speed BMW motorcycle after recording a top speed of 209.5 mph on a 1.5-mile race course at the Mojave Magnum in June.

“We experienced a lot ‘firsts’ for our team this weekend. This was the first time competing in the Ohio Mile, first time to race in an ECTA sanctioned event, and our first opportunity to promote new team sponsors, Stay Fast Custom Clothing and AAMCO Transmission & Total Car Care,” said Thompson. “It’s also my first record on a BMW, which is a real step up from the Harleys I’ve raced in the past. This is only our second event of the year with the new bike and it’s really responding to our tune-ups. We are looking forward to competing in more ECTA events, they do an excellent job. I can’t say enough about the wonderful work performed by all the volunteers from ‘Little Hearts – Big Smiles of Southwestern Ohio’, ” added Thompson.

The long-standing competition was re-named the “Ohio Mile” when the event was moved from Maxton North Carolina to Wilmington when the Airborne Park facility became available this year. The next ECTA competition at Airborne Park is the “Throttle Nation Top Speed Challenge,” September 29 – 30.